Recently, I wrote about Bordeaux and Bordeaux Superieur and the mostly Merlot-dominant wines from those “in between” (or “in the middle”) and hinterlands appellations. Here I want to focus on Cabernet-dominant reds and the place they come from: the left bank. 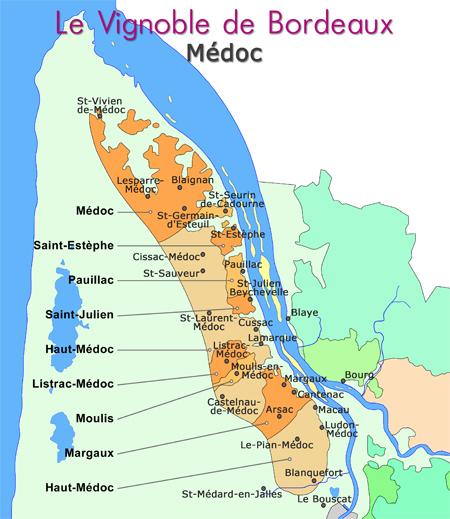 Whenever I do an “Introduction to Bordeaux” type tasting, I always start in the Middle, move to the Right Bank, jump down to Graves, and then up to the Medoc. The Middle (my term) and the Right Bank offer Merlot-dominant reds. Graves (including Pessac Leognan) often offers the best balance between Merlot, Cabernet Sauvignon, and Cabernet Franc (with Cabernet Sauvignon holding something of an edge). Heading north from the city of Bordeaux onto the Medocaine Penninsula is where we find Cabernet Sauvignon Sauvignon really taking over. When we taste wines in those Bordeaux Basics classes, most people show a recognition that something has changed when we get to the Graves but everyone gets that “Dorothy, we’re not in Kansas anymore” look when we taste the first mostly Cabernet red from the Haut Medoc.

Haut? Yes Haut, as in “upper” Medoc … but maybe not in the sense you might imagine. Not “upper” as in above (north of) Bordeaux. Rather “upper” as in “up river” from the northern part of the Medoc. That northern section is known simply as the Medoc and the southern section is the Haut Medoc. Since the peninsula is continuous and the two appellations are contiguous, you might wonder why a big deal is made about separating them. Well, there are always boundries between lesser and greater and in that sense, the Haut Medoc is more “Haut” than the Medoc.

The Haut Medoc appellation contains the still fancier appellations of Margaux, St. Julien, Pauillac, and St. Estephe, as well as the more western appellations of Moulis and Listrac so in its inclusive entirety, the Medoc contains much of the best Cabernet-friendly terroir and many of the biggest name chateaux (Calon Segur, Montrose, Cos d’Estournel, Lafite, Mouton, Latour, the Pichons, the Leovilles, Ducru Beaucaillou and Beychevelle and Branaire, Margaux, Palmer, Rauzan Segla, and Cantenac Brown, etc.) in Bordeaux. And even excluding the famous sub-appellations, the well-known names include chateaux such as Sociando Mallet, Larose Trintaudon, Lannessan, Malescassse, La Lagune, Cantemerle, and Camensac.

So what makes this area superior to its northern neighbor? In a word (or two), Cabernet (Sauvignon).

If you look at the map of the Medoc peninsula, you see that it narrows as it extends north. What you don’t see is that the coastal dune field is lower and narrower in the north and that the pine forest between the dunes and the vineyards is also lower and narrower so the vines in the north are less protected from cold wind and other weather blowing in from the Atlantic Ocean (or, more accurately, the Bay of Biscay). The other thing the map doesn’t readily show is that the band close to the Gironde estuary where the glacially deposited gravel mounds that define the Cabernet terroir of the Haut Medoc begins to narrow. That gravel, which near Pauillac can be found as far in from (west of) the Gironde as Saint Saveur in the Haut Medoc, doesn’t come past halfway to Lesparre in the Medoc. Because of both the cooler, windier conditions and the Cabernet-suited gravel giving way sooner to a clay-over-limestone terroir more suitable for Merlot, the cepage (mix of grapes) used in the Medoc is more often Merlot-dominant whereas the Haut Medoc cepage is most often Cabernet Sauvignon-dominant to the tune of 52% of the total plantation (with the balance made up of – in descending order – Merlot, Cabernet Franc, Petite Verdot, and Malbec with a superfluous miniscule amount of Carmenere). While at 52%, Cabernet (Sauvignon) still makes a majority of the vines for the whole of the appellation, the percentage rises at the best sites with (especially in the riper vintages) most of the better properties using 60% or more Cabernet Sauvignon in their “grand vins” or best wines.

So Cabernet Sauvignon grown in deep, well-drained gravel and sand is what defines the flavor of the Haut Medoc and differentiates if from the wines of the right bank or the Middle or even from its neighboring Medoc. What, you might ask is so different about Cabernet? As a product of a crossing between Cabernet Franc and Sauvignon Blanc, Cabernet Sauvignon gets some of the herbaceous character found in both parents. In Medocaine Cabernet Sauvignon, that character manifests as tobacco leaf more often than anything else. And that tobacco note combines with Cabernet’s cedar and graphite and black pepper to compliment its mix of red-and-black, cherry-and-berry fruit to marry with the terroir’s dusty-gravelly notes, complimentary (and complementary?) aromas and flavors from the supporting cast (mostly Merlot) and often (but not always) a dusty-sweet-spicy oak nuance. Yes Dorothy, we’re not in Kansas (or even St. Emilion) anymore. We are now in the Haut Medoc where Cabernet (Sauvignon) is king.

As (for me, at least), wine is food, one of the reasons I like the Cabernet Sauvignon-based wines of the Haut Medoc so much is how well they work at the table, especially with the foods I like to eat the most. When young they are perfect with grilled beef steaks and lamb chops and can even work with grilled pork and veal. With a bit of age, they are fine with birds including chicken and turkey but especially with quail, dove, and squab (pigeon) and even grilled magret de canard (duck breast) and confit de canard (duck confit). With more age, they are suitable for fine slow roasted lamb, beef, pork, or veal joints.

As you might expect with a region as long (from north to south) as the Haut Medoc, the character of the wines changes as you move from north to south. The area near St. Estephe is cooler and windier and so the wines are more elegant (but some might say leaner). In the gravelly areas just west of and south of St. Julien (such as Cussac and Arcins) there is more richness and maybe more ripeness but the dusty gravel notes are still present. South of Margaux (closer to Bordeaux), there is more warmth and richness and even some perfume, but again, as long as Cabernet dominates and the terroir is gravel, the classic dusty Haut Medoc character is there. If the grapes were grown out in the western Haut Medoc in Moulis or Listrac, the better wines now tend to a bit more Merlot and a bit less Cabernet Sauvignon. If too much Cabernet Sauvignon grown on the wrong terroir is in the blend, the wines can be overly rustic and even a bit funky. When choosing a wine labeled Haut Medoc, it pays to know both the cepage and the location within the appellation. Here is just that information for some of the Haut Medocs better names.